Chinese TV show being filmed in the region 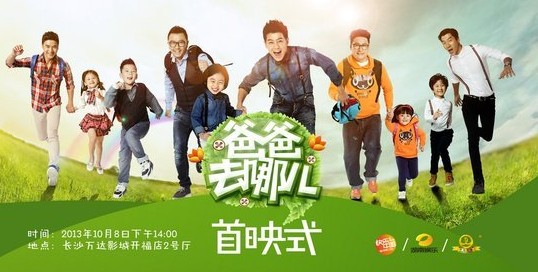 A contract has been secured by Tourism WA to film the television show ‘Where are we going, Dad?’ in the Margaret River Region, which certainly presents an exciting tourism opportunity.  As an emerging holiday destination for the Chinese traveller, the show will facilitate wide-ranging exposure for the Margaret River Region in a market which can be difficult to access.  Over 750 room nights will be booked to accommodate over 200 cast and crew members who are travelling to the region to shoot the two episodes, which will inject significant tourism dollars into the local economy.

The MRBTA is not directly involved in the filming of the TV show, and at this stage the TV production company is not seeking expressions of interest for inclusion of product or filming locations.  The MRBTA will continue to liaise with Tourism WA and will advise all members if any opportunities arise to participate in the filming.

The show itself attracts more than 75 million viewers per episode and has been China’s third highest rating television show since is premiered in October 2013.  It has brought noteworthy media coverage to other destinations; two episodes featuring New Zealand were aired in 2014 and generated significant media value and promotion of New Zealand’s tourism industry. China continues to be one of the strongest improving markets to WA with 16% growth in the year ending June 2015, compared to overall growth to WA across all markets of just 4.4%.  Nationally, Australia has in fact experienced a 22% increase in visitation from the Chinese market in the year ending June 2015, indicating that it is definitely a growing market not only for Western Australia, but for the whole country. Furthermore, for the Chinese traveller, the South West is WA’s highest regionally visited area outside of Perth.

Feedback from travel agents and Tourism WA indicate the Margaret River Region is starting to attract a fair share of the Chinese market, and as the region’s tourism products gain greater exposure in the Chinese marketplace we are confident there is significant potential for tourism. One of the major benefits of the China market is that their reasons for travelling are generally different to other markets and other than Chinese New Year period which often falls in January, the Chinese travel periods are not focused around our traditional high seasons. For example – the Chinese traveller does not seek beach, sun and surf experiences so prefer to travel in shoulder periods .  Winter is also a draw card as those Chinese who come from the warmer provinces like the opportunity to don a scarf and coat and drink red wine by a fireplace during the cooler months.   As a result, the Chinese market has great value in filling rooms during our quieter periods.  MRBTA will actively continue to develop this market particularly with opportunities around food and wine tourism in the future.