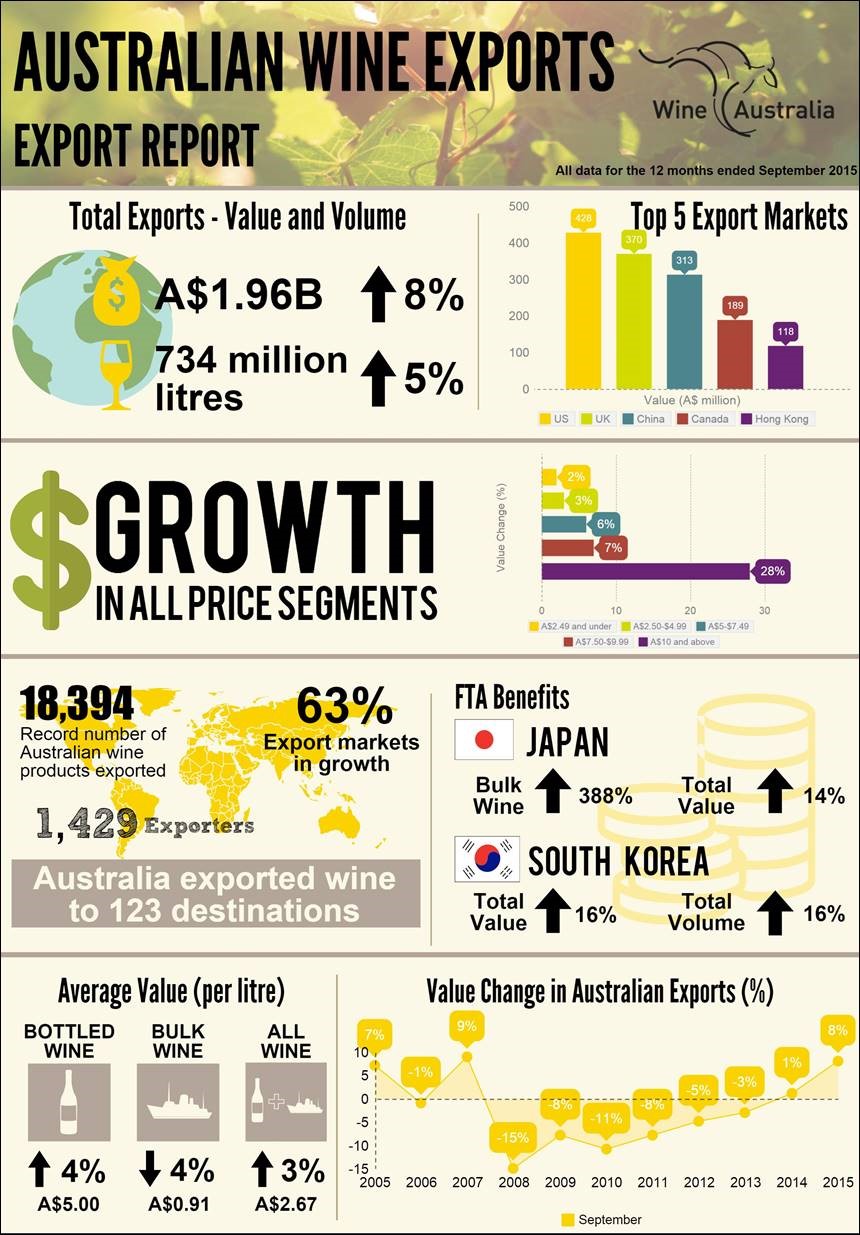 In the 12 months to 30 September 2015, the value of Australian wine exports rose 8 per cent to A$1.96 billion, the strongest rate of growth since export value peaked in October 2007 according to the Export Report September 2015 released today by Wine Australia.

In a sign of much needed improvement in profitability for Australian wine, the rate of value growth is currently outpacing volume which increased 5 per cent to 734 million litres.

these export results are unambiguously good news for our grape and wine community. Clearly it’s still early days and the improvement we've seen in exports in the last 12 months hasn't yet flowed through to the grape growing community at large but there are pockets of growers who reported improved prices in vintage 2015 and we hope to see this trend continue next vintage.

This pattern of growth was seen across many of the premium price segments. Exports of Australia’s highest-priced wines (above A$50/litre) rose 54 per cent to a record A$133 million. While the segment accounts for only 0.2 per cent of total exports, it’s worth 7 per cent of total value.

‘We’re seeing the strongest rates of growth in our premium price segments. Wines above A$10 per litre grew in value 28 per cent to A$426 million, a record for this segment. Wines in the A$20-$50 segment increased 13 per cent to A$88 million.’

Asia, now the number one region for Australian wine exports by value grew 31 per cent to a record A$644 million. China again saw the strongest growth rising 47 per cent in value to a record A$313 million driven by demand for wines in the higher price points with exports to China above A$10 now worth A$116 million to the Australian wine sector. Wine Australia will drive a number of activities in-market leading up to the end of the year including the third Wine Australia Annual China Awards, an Australian wine retail promotion with major wine site partner WineYun.com and a stand at ProWine China in November.

Exports to Hong Kong hit a record in June and continued to rise in the 12 months to September up 24 per cent to A$118 million.

Exports to Germany increased in value 10 per cent to A$51 million while exports to Finland, where Wine Australia recently hosted trade and consumer tastings as part of the annual Nordic Roadshow increased 12 per cent to A$15 million.

Success for the Australian wine category in the US can differ from state to state and although exports declined 4 per cent to A$428 million, in encouraging news the latest quarter has shown a reversal of decline with exports increasing 12 per cent to A$117 million, a trend we hope to see continue.

Of Wine Australia’s six priority US states (California, New York, New Jersey, Florida, Texas and Illinois), all but one saw growth in bottled wine exports in the latest quarter with California, Florida and New York all seeing double digit growth, up 20 per cent, 56 per cent and 14 per cent respectively.

Australian exports to Canada grew 4 per cent in both value and volume to A$189 million and 63 million litres respectively.

The wine market in Canada is divided along provincial lines with two dominant markets – Ontario and Quebec. Ontario and Quebec make up 65 per cent of the market at 30 and 35 per cent respectively; followed by British Columbia at 16 per cent and Alberta at 10 per cent. Quebec has been a bright spot for Australian exports lately, growing 5 per cent in value to A$39 million and 9 per cent in volume to 19 million litres. There were similar results in Ontario: with value also up 5 per cent to $A73 million and volume up 9 per cent to 21 million litres.