The Rounding the Cape initiative envisages a circuit walk around the Cape Leeuwin headland, incorporating:

f the Rounding the Cape Concept 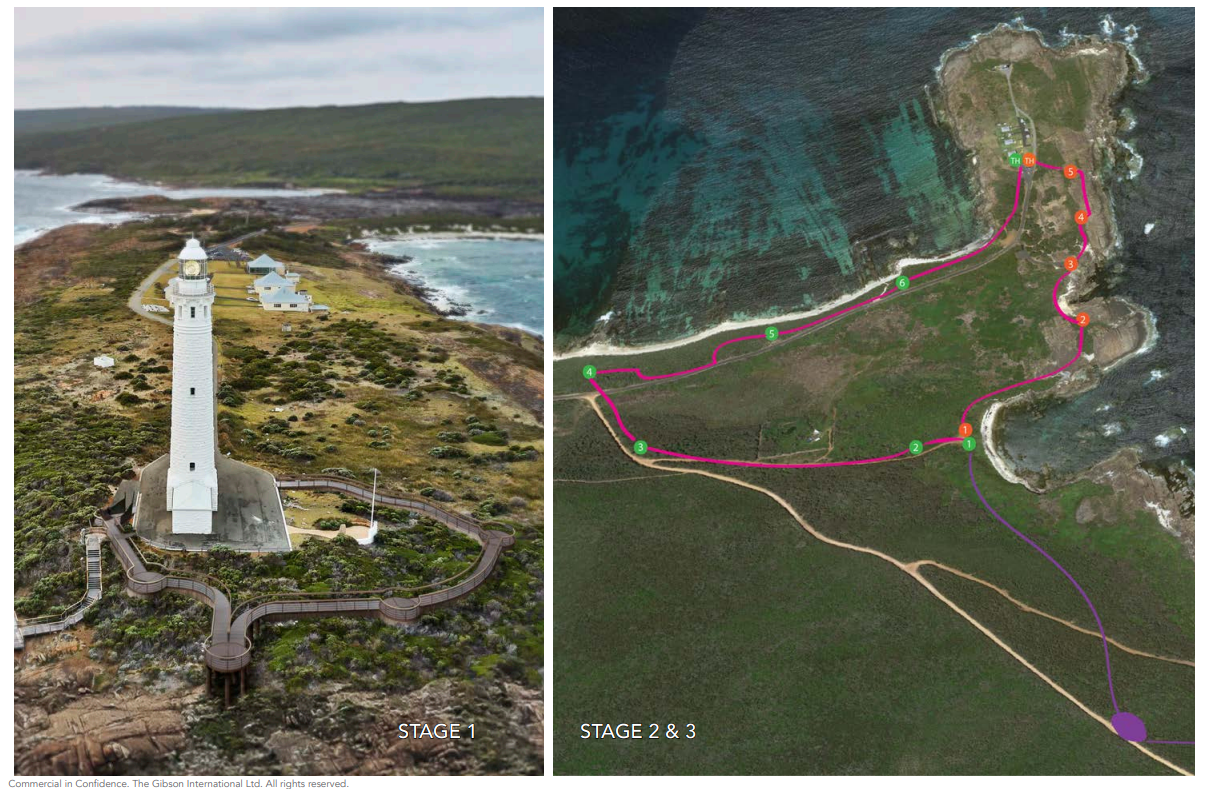 The Rounding the Cape initiative is intended to provide:

The concept is devised to enable its progressive implementation in accordance with available funding and opportunities.

In the first instance the track will not comprise the full circuit. The first section would comprise the existing path of the Cape to Cape Track between Quarry Bay and the Cape Leeuwin Lighthouse environs, with existing parking being available at both ends.

The Dutch galleon Leeuwin (Lioness) was the first European ship to come to the south west coast of Australia in March 1622, possibly as a result of navigational error, en route from Holland to Batavia (Indonesia).  The ship gave her name to the entire region of the continental coastline she mapped, ‘t Landt van de Leeuwin, Leeuwin Land. In 1801 Matthew Flinders named Cape Leeuwin.

2. Enhanced trailhead for the southern end of the Cape to Cape Track

4. Adaptation of walking route within the lighthouse grounds to create a circular route with interpretation

Fig 2 below (click to enlarge): Illustrative map of Proposed Initial Implementation of the Rounding the Capes Initiative 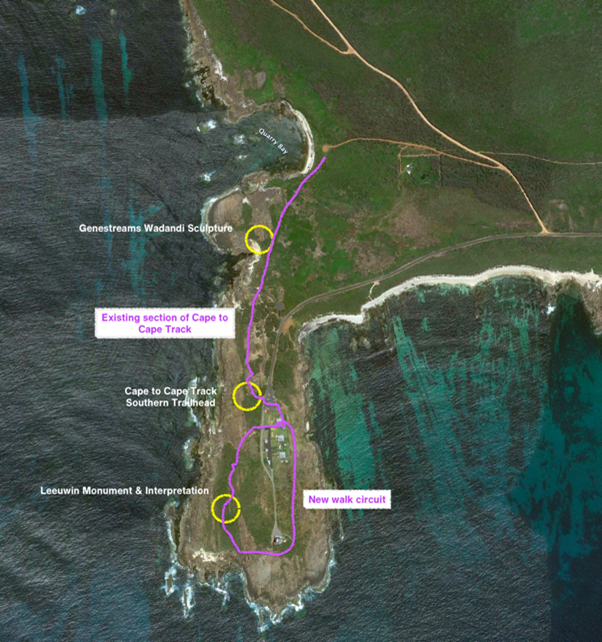 From a geographical and maritime perspective, Cape Leeuwin is one of the 3 Great Capes of the world. In the history of maritime navigation, Cape Leeuwin is seen as an equivalent to Cape of Good Hope and Cape Horn. We now have an opportunity to recognise the status of Cape Leeuwin and tell its stories to the world and our visitors.

Specifically, the story of the Leeuwin is important because it ‘belongs’ in the mosaic of histories that together tell us more about the Southwest region of Western Australia; long inhabited by Aboriginal custodians of this land.

In 1611 the VOC mandated the ‘Brouwers Route’ from the Netherlands to Indonesia, utilising the roaring forties. This cut the trip from eight to four months.

Using this route, but unable to determine longitude, the Leeuwin sailed too far east before turning towards Batavia (Indonesia). As a result the Leeuwin needed to navigate around the south west corner of the WA coastline. The Leeuwin’s encounter with the WA coast comes with a description of the shore, and this appears on the first map of the WA coast, which was produced by VOC cartographer Hesselt Gerritsz in 1627. Cape Leeuwin is the place where in 1658 two cultures (Aboriginal and European) encountered each other for the first time at Cape Leeuwin, as recorded in the logbooks of the Elburg. (edit from research by Nonja Peters)

The Aboriginal custodians of this land have lived in harmony with the country for many tens of thousands of years. They have intimate knowledge of the area and lived on this country governed by the six seasons of the year.

In March 1772, French explorer Lois Aleno Francois de St Alouarn used the charts based in part, upon the Leeuwin’s voyage, to seek shelter at the Cape. This was part of a voyage from Mauritius, to look for the ‘Great South Land’. One of the islands 6 kms from the Cape is named in his honour.

In December 1801, English Explorer Matthew Flinders began his circumnavigation of the continent by heading to the ‘Land of Leeuwin’ and upon sighting the Cape naming it Cape Leeuwin in recognition of that voyage of 1622. Flinders was the person to compile the first complete map of Australia, which referenced earlier Dutch charts of the western and southern coasts of the continent.

The Cape can have extreme weather conditions and is surrounded by submerged reef and rocks.

Sir Francis Chichester described Cape Leeuwin as one of the ‘three most dangerous capes for mariners’ in his memoirs, after becoming the first person to sail single handed around the world in 1966/67. A sentiment that continues to this day amongst mariners, giving the coastline notoriety which is often referenced in publications and the media.  There is also an Australian War Memorial adjacent to the lighthouse, to acknowledge 10 ‘ratings’ (sailors) swept overboard and lost at sea from the deck of the HMAS Nizam, in 1945. A commemorative Naval service is held annually at that memorial.

Cape Leeuwin lighthouse is the tallest on the Australian mainland. The lighthouse is operational and plays a vital role in maritime safety and navigation. Enhanced technology means the Australian Maritime Safety Authority can track, warn, and guide the many vessels that pass the Cape each day. 22 ships were wrecked in the surrounding waters prior to the lighthouse being built. Of note is the wreck of the passenger liner ‘Pericles’ which sunk out from Cape Leeuwin in 1910. The largest passenger liner to sink off the Australian coastline. All aboard were rescued due to the actions of the Lightkeepers in guiding lifeboats to the safe parts of the shoreline.

Cape Leeuwin is often the first or last sighting of the mainland of Australia. Seeing the Cape from the seaward side has been a memorable experience, especially for people who have migrated to Australia. Quite often heading to a new home post World War 2  during the exodus from Europe. Many of them from the Netherlands.

The major current that travels from Northern Australia southwards along the West coast and around to the Great Australian Bight is named the Leeuwin Current. This warm water current creates climatic conditions that give the region a unique natural environment. The Australian Bureau of Meteorology have a weather station at the Cape, which is one of the most important ‘of its type’ due to weather records being kept there since 1897 (for climate variability) and extreme weather events first experienced at the Cape, being a forewarning of such conditions that may impact further afield.

In the winter months, the coastline around the Cape is frequented by Southern Right and Humpback whales, making it a premier whale watching location. The Cape is also the southern end of the Cape to Cape walk trail. A popular multi day track that draws people from interstate and overseas. As well as hosting day one of the Cape to Cape Mountain Bike race. Australia’s biggest off road cycling event.

The geographic position, maritime history and natural environment means that the Cape is visited by up to 120,000 people each year. The place where the Southern and Indian Oceans converge. It is also the extreme southwestern point of the Australian mainland. A place where the southern and western coastlines of Australia meet. Species of native plants, a world-renowned winery and numerous community organisations and businesses have the name Leeuwin in their title.  However, many people are unaware of the part played by the Leeuwin in the unveiling of Australia’s coastline and first encounters with Indigenous peoples or where indeed the name Leeuwin originated.

So, 2022 and any means of recognising and commemorating that voyage and contact with the southwest coastline of Australia, would undoubtedly help to raise the profile of the links between Australia and the Netherlands and the shared history.

want all the latest news in your inbox? subscribe to our in-depth newsletters